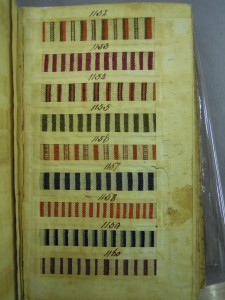 I recently visited Quarry Bank Mill near Wilmslow, Cheshire, one of the early water-powered cotton spinning mills, built on the River Bollin in 1784 to house the mechanical spinning frames invented by Richard Arkwright a decade and a half earlier. Now a National Trust property with working machinery, it also hosts an archive, which includes, on loan, the pattern book of the firm of Robert and Nathan Hyde of Manchester, dated 1771. This is one of a handful of pattern books from the late 1760s and early 1770s circulated by Manchester merchants as they developed a direct export trade, independent of London.* Others are in the USA, at the Henry Francis du Pont Winterthur Museum in Delaware and the Metropolitan Museum of Art in New York City. All these books contain a similar range of textiles, representative of the finished goods then being manufactured in Lancashire. The Hyde book includes checks, stripes, silk mixes, diapers, dimities, tapes, fustians, jeans, corduroys, thicksets, and worsted shags and plushes. Missing from this and the other books are printed textiles, because at this date most printing of Lancashire-made fabric was undertaken on the outskirts of London. The surprising feature of the textiles in these pattern books is the relatively small proportion of cotton yarns. The checks consist predominantly of linen yarns, with only some of the coloured yarns spun from cotton. The stripes, the dimities and the fustians (insofar as it is possible to see the individual yarns) are mostly woven half from linen yarns, and half from cotton yarns. We know from other sources that the same was true of Lancashire-produced ‘cotton’ fabric used for printing. It seems likely, therefore, that in the early 1770s what we often refer to as the Lancashire cotton industry was actually weaving textiles containing more linen yarn than cotton yarn. Thanks to Philip Sykas of Manchester Metropolitan University for organizing the visit and to Alkestis Tsilika from Quarry Bank’s archive.