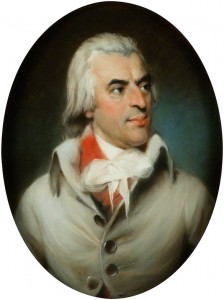 Between 1767 and 1771, the agricultural writer and journalist, Arthur Young (1741-1820), undertook a series of tours across the south, east and north of England. On these journeys he observed agricultural practice and collected the opinions of improving landlords and farmers about farming techniques. The results were published in three books: A Six Weeks’ Tour through the Southern Counties of England and Wales (1768), A Six Months’ Tour through the North of England (1769), and The Farmer’s Tour through the East of England (1771). Young was interested not only in agricultural techniques, but more broadly in the rural economy and rural living conditions. According to the title page of his Tour through the Southern Counties, it is a book ‘describing particularly the present state of agriculture and manufactures’, but also ‘the prices of labour and provisions in different counties’ and ‘the state of the working poor in those counties’. As a consequence, Young consistently recorded information about ‘the employment of the poor women and children’ in many of the places where he stopped to collect data from his local contacts. In the vast majority of cases that employment was spinning, and often Young tells us which fibres the spinners processed and the wages they were paid, whether adults or children.

Young’s tours do not furnish us with a systematic survey of spinning across rural England at the end of the 1760s. His tours bypassed much of the West Country and the places for which he provides detailed information are those where he already had connections, or was able to establish them. Yet Young was admirably systematic in the way he approached his task, asking the same questions in each locality he visited. Usefully he often includes negative findings, although the answers he recorded are not always consistent. His published tours provide the best available survey of spinning (and other paid manufacturing employment for women and children) at a date just before James Hargreaves’ spinning jenny and Richard Arkwright’s water frame began to transform spinning employment.

Together, Arthur Young’s three English tours include observations on the availability of women’s and children’s manufacturing work for almost a hundred places scattered across broad swathes of rural England during a period of less than four years. Below are four maps which summarize Young’s findings. For more detail, click on a map. 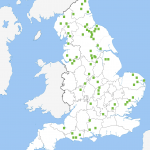 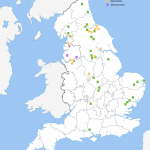 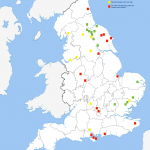 For more on Arthur Young’s surveys, see Liam Brunt, ‘The advent of the sample survey in the social sciences,’ Journal of the Royal Statistical Society: Series D (The Statistician), 50 (2001), 179-89.

The most exciting new research tool used on the Spinning Project is a hand-held USB microscope. The Project has been using a Dino-Lite AM7013MZT at x60 and x200 magnification to identify yarns in surviving textiles. USB microscopes have only become widely available in the last decade. Their portability means it is possible to use them in archives and museum stores to undertake microscopic examination of large numbers of historic textiles, capturing the results as digital images on a computer. Microscopic investigation of this kind has been particularly useful for studying textiles made from more than one type of yarn: for example, silk and worsted, linen and wool, or cotton and linen. It has proved especially important for the study of eighteenth-century ‘cottons’, demonstrating that in all the fabrics usually described as Lancashire cottons (checks, prints, velvets, fustians, etc.) there were very high proportions of linen yarn prior to the 1780s. Below are images of mid-eighteenth century textiles from the archive of the London Foundling Hospital, captured at x60 magnification. For more details, click on an image. 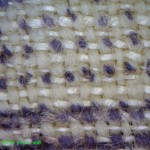 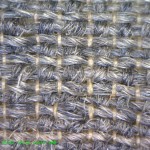 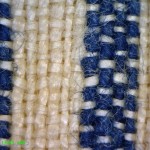 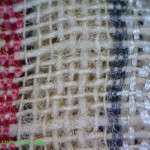 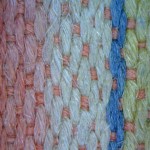 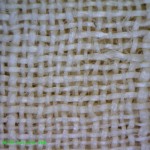 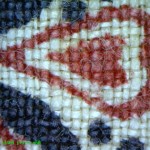 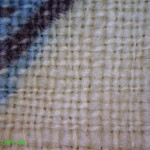 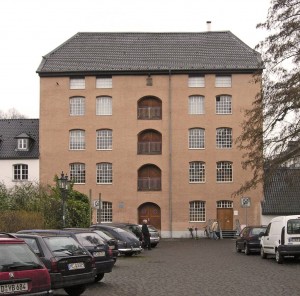 The first water-powered cotton spinning mill in continental Europe was constructed in 1783-4 at Ratingen, outside Düsseldorf in Germany, by Johann Gottfried Brügelmann, a Wuppertal merchant, to house copies of Richard Arkwright’s water frames. Its five-story Hohen Fabrik now houses the LVR-Industriemuseum Textilfabrik Cromford. It contains a working reconstruction of one of these machines. The reconstruction is based on surviving late-eighteenth century machinery from Richard Arkwright’s own Cromford, Derbyshire factory, now preserved at the Helmshore Mills Textile Museum in Lancashire.

The Ratingen museum provides one of the few opportunities to observe how an Arkwright water frame actually worked. Especially striking is the fixed positioning of Arkwright’s famous rollers that draw out the cotton roving for spinning. The lack of adjustment means the machine is limited in the kinds of cotton it can spin, because the distance between the three sets of rollers has to match the staple length of the cotton fibres. Very short-staple cotton, of the kind grown in the eighteenth century in the eastern Mediterranean and India from Old World species of the cotton plant, cannot be spun. The layout of the rollers is optimised for the longer-staple cottons which, in the eighteenth century, were available only from the two New World species. This suggests that Arkwright’s early success was heavily dependent on access to longer-staple, New World cottons, mainly from the Caribbean, but increasingly from Brazil.

The video clip above shows the reconstructed water frame at Ratingen in action. Wound around each of the bobbins at the top of the machine is a pre-prepared cotton roving – a long, thin, loosely-wound tube of cotton wool. Each roving is drawn down off its bobbin by a set of three pairs of rollers. They turn at different speeds in a sequence which draws or stretches out the roving. The surface of the lower rollers is ribbed metal; the upper rollers are covered in leather. Each of the three pairs of rollers is weighted. As the attenuated cotton roving leaves the rollers, it is pulled down and spun into yarn by the flyer/spindle mechanism at the bottom of the machine.

Open in full-page view to see the machinery in detail.

The close-ups of the rollers in the video show how they slot into fixed positions in their metal housing. Behind the rollers is a board with metal hooks to guide the roving. It can be seen to move slowly from side to side. This is to ensure that any abrasion is evenly distributed across the upper, leather-covered roller.