Spinning in the Era of the Spinning Wheel 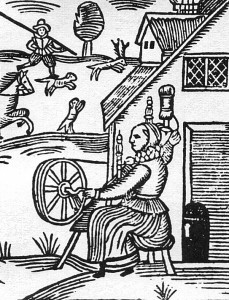 A woman spinning, detail of a woodcut  from the blackletter ballad, ‘Ragged, and Torne, and True’, c.1620.

From the introduction of the spinning wheel to England during the later Middle Ages to its eclipse by powered spinning machines early in the nineteenth century, hand-spun yarn was vital to the success of the textile industries that dominated English manufacturing. Indeed, hand spinning – of wool, flax and ultimately cotton – became the principal income-generating activity pursued by women. For many of those women, it was also an essential means of furnishing their own families with textiles. Spinning was, at one and the same time, the foundation of England’s rise to pre-eminence in the international trade in textiles, and a crucial means by which rural families supplied themselves with cloth. Yet hand spinning before the Industrial Revolution is typically dismissed as a low-productivity bottleneck that needed to be overcome in the forward march of economic and technological progress. It has rarely been studied in its own right.

‘Spinning in the Era of the Spinning Wheel’ was a five-year European Research Council project between 2010 and 2015, led by Professor John Styles at the University of Hertfordshire, UK. The project grew out of John Styles’ research since the 1980s on crime, the criminal law, manufacturing, design and material life in England during the eighteenth century. Since the project started, interest in early modern spinning has burgeoned. Hand-spinning has been at the heart of recent studies of early modern women’s work and welfare, as well as debates about the sources of technical innovation in the British Industrial Revolution. Through his Spinning Project website, John Styles continues to engage with these issues, both in publications (see Outputs) and in his Blogposts (see Recent Posts listed on this page). The website also makes available manuscript versions of his earlier works dealing with textile manufacturing and clothing.